Series / Up All Night 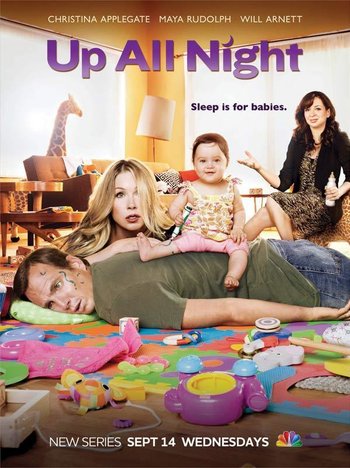 Up All Night is an NBC Sitcom starring Christina Applegate, Will Arnett, and Maya Rudolph. It managed to have three Retools over the course of its two seasons.

In the first season, Reagan Brinkley (Applegate) has just gone back to work after giving birth to her daughter Amy (played by twins Carly and Delaney Prince). Reagan struggles to balance her work and home life, with the help of her supportive, stay-at-home husband Chris (Arnett). At work, she is the Only Sane Employee at Ava, an Oprah-like Talk Show. She is also the best friend and Living Emotional Crutch of Ava herself (Rudolph), a somewhat neurotic and self-centered TV star. The first season cast is rounded out with quirky co-worker Missy (Jennifer Hall).

Retool #1 happened before the show even aired. The pilot was originally filmed with Rudolph in a supporting role, playing Reagan's boss at a PR firm. After the success of Bridesmaids, it was decided that Rudolph needed a bigger and funnier part. Hence, the pilot was refilmed with the PR firm changed to the Ava talk show. This resulted in Up All Night being two shows at once, one a realistic Dramedy Dom Com about new parents and the other a wacky 30 Rock-esque Work Com about show business. Critics and the show's creators felt the tonal dissonance was too much.

Cue retool #2. The second season opens with the news that Ava has been cancelled. With this development, Hall is dropped from the cast, although Rudolph remains, as Ava is still Reagan's best friend. Joining the cast in the second season is Luka Jones as Reagan's lovable loser brother Scott. With his wife now unemployed, Chris goes back to work and, finding his old job soulless, begins a company with Scott as his partner. Essentially, the Work Com aspects of the show were eliminated and it became a straight Dom Com.

Then came retool #3, which unraveled the show into oblivion before it could even take effect. NBC decided that Up All Night, which to that point had been done in a single-camera format without a Laugh Track, would switch to a multi-camera format with a Studio Audience because why the hell not. They'd already tried everything else. Some truly nutty ideas were thrown around, such as baby Amy being able to see a portal connecting the single-cam world to the multi-cam world. In the end, they settled for the completely sane concept of having the entire show turn out to be a Show Within a Show, and from that point on follow the lives of the fictional actors playing Reagan, Chris, and Ava.note Seriously, we're not making this up.

Somehow, Applegate was unimpressed and jumped ship, followed by Arnett and Rudolph. The show was dead, but it still took several months before NBC acknowledged defeat and canceled the show officially.

(Not to be confused with the '90s USA Network series hosted by Gilbert Gottfried and Rhonda Shear that presented cheesy B-Movies mixed in with even cheesier comedy sketches.)