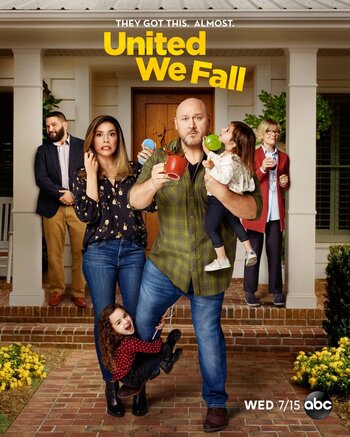 They Got This. Almost.
United We Fall is an American television sitcom, created by Julius Sharpe, that premiered on ABC on July 15, 2020. It starred Will Sasso and Christina Vidal Mitchell as a couple with young children whose household is turned upside down when his mother (Jane Curtin) moves in with them. In September 2020, the series was canceled after one season.
Advertisement:

Jo and Bill Ryan are the parents of two young children, just trying to make it day to day as a functioning family. Bill's very judgmental live-in mother and Jo's large Latinx Catholic family never hesitate to let the couple know they're seemingly screwing everything up, but Bill and Jo always have each other's backs, united against everyone — other parents, teachers, doctors, specialists, coaches, co-workers and, especially, their kids.