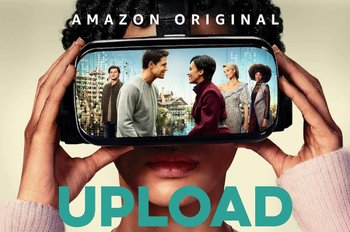 Upload is a 2020 Amazon Prime original sci-fi sitcom by television icon Greg Daniels (The Office (US), King of the Hill).

By the year 2033, humans have developed the ability to upload themselves into their preferred choice of Artificial Afterlife. In Los Angeles, software engineer Nathan (Robbie Amell) is fatally injured in a self-driving car accident. His shallow girlfriend Ingrid (Allegra Edwards) pressures him into agreeing to be uploaded to her family's luxurious virtual heaven, Lakeview. Once there, he is greeted by Nora (Andy Allo), his customer service representative (or "Angel"), who appears as a holographic avatar while actually working in an office in Queens alongside other "Angels".

The series follows the two as Nathan grows accustomed to his imperfect afterlife with Nora's help, the still-living Nora struggles to stay afloat, and the two begin to find out that there's more to the story of Nathan's upload than it sounds.

On May 8th 2020, a week after its release, it was renewed for a second season