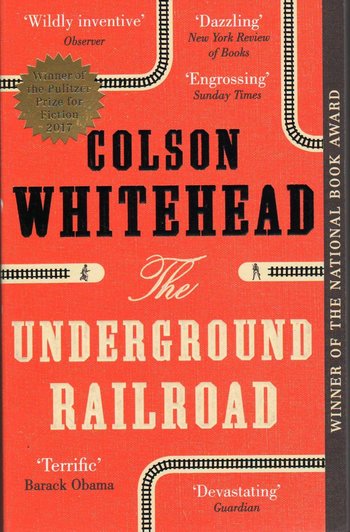 "The world may be mean, but people don't have to be, not if they refuse."
Advertisement:

The Underground Railroad is a 2016 novel by Colson Whitehead and winner of the 2017 Pulitzer Prize for fiction and 2016 National Book Award.

Cora is a third-generation slave on the Randall plantation on one of the sea islands of Georgia. Her life is the life of an American slave: degradation, savagery, misery, despair. Her mother, Mabel, is the only slave to have ever escaped from the Randall plantation, having disappeared when Cora was ten, her fate unknown, leaving Cora all alone.

Cora has been something of a social outcast among the slaves ever since she was orphaned. Her isolation only increases after she intervenes in the caning of a slave named Chester. Soon after that James Randall, the passively evil owner of the plantation, dies, and is succeeded by his much more actively malevolent brother Terrance. Thus, when a slave named Caesar approaches Cora and invites her to make an escape attempt with him, she does. They then go on the Underground Railroad—which in this novel is a literal underground railroad, with locomotives on subterranean tracks, bearing slaves to freedom in the north.

In 2021, the novel was adapted to a Prime Video series, directed by Barry Jenkins and starring Thuso Mbedu as Cora.