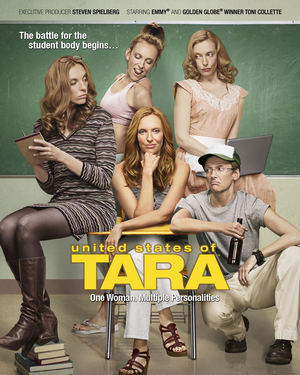 Tara Gregson (Toni Collette) is a mid-30s mother of two with Dissociative Identity Disorder. After Tara takes a break from her meds to discover the cause, three of her alters resurface: Buck, a male alter who likes the firing range and claims to have lost his member in 'Nam; Alice, a 1950s housewife who claims to have attended Radcliffe at Harvard; and T, a pot-smoking, flirty teenager who likes maxing out Tara's credit cards.
Advertisement:

United States of Tara is an American Dramedy that explores the effect DID can have on a family. That family in this case includes her husband, Max; her daughter, Kate, and son, Marshall, all three of whom have problems of their own. Max has more patience than Job, Kate's going through that awkward time known as the teenage years and Marshall has to deal with being an openly gay 14-year-old (and Buck being the manliest of men).

The series was created by Steven Spielberg and written by Diablo Cody. It began running on Showtime in January of 2009 and ran for three seasons.