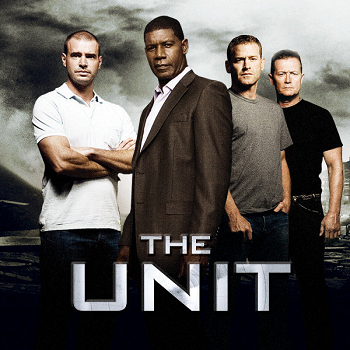 US TV series running from 2006 to 2009 for a total of four seasons, created by Shawn Ryan (creator of The Shield) and famed playwright David Mamet.

The series revolves around the missions of an elite special forces team, the 1st Special Actions Group under their cover as the 303rd Logistical Studies Division, which carries out ultra-top secret black ops missions for the US Government.

The show attempts to be both a family drama and a male-centric show about war via the split focus upon the men in the "Unit" and their wives, of various different clashing personalities, who are forced to co-exist and pretty much lie to everyone around them about their husbands do for a living, due to the classified nature of the group. A lot of the practices and terminology used in the show come from Inside Delta Force, the memoirs of Command Sergeant Major Eric Haney, one of the unit's founding members. For all intents and purposes, the 303rd is Delta Force, with the serial numbers filed off.

The show was a mixed bag, dealing with a variety of issues involving The War on Terror and generic soap opera stuff involving the wives, who spend most of their time together trying not to kill each other when they are not getting in and out of trouble or being dragged kicking and screaming into the cloak and dagger world of their husbands.

Not to be confused with UNIT.

"I track a man, I can tell you what he had for breakfast."