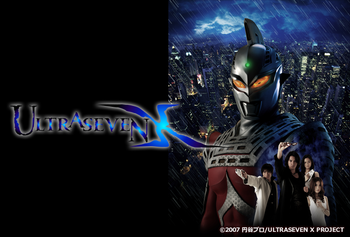 Not Your Daddy's Ultrasevennote From left to right: Ultraseven X, K, Jin, S, and the mystery woman Elea
Advertisement:

Ultraseven X is a 2007 tokusatsu Cyberpunk Dirty Martini Spy Fiction series produced by Tsuburaya Productions. It is a Darker and Edgier reimagining of the classic Ultraseven series.

In the 23rd century, Deus agent Jin awakens in a strange apartment to find his memories missing. A mysterious woman hands him a strange item, the Ultra Eye, with which he can change into the mysterious giant called Ultraseven X. Now, he must fight the alien invaders that threaten his world and figure out the mystery behind his missing memories.

This is one of the few Ultras in the Ultra Series aimed exclusively at adults.