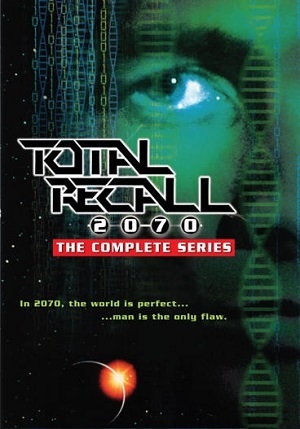 Total Recall 2070 is a 1999 Canadian sci-fi television series. It is loosely based on both Total Recall and Blade Runner, both based on works by Philip K. Dick (with just a dash of William Gibson's Johnny Mnemonic), as a Spiritual Adaptation. Like the works it is inspired by, the tone is a mix of Film Noir and Cyberpunk with occasional action.

The series is set in a late 21st century Earth in an American megalopolis after a series of nuclear wars. Mankind has since established off-world colonies and made major advances in both android technology and memory implants, while massive corporate networks have become independent powerhouses in their own right. Protagonist David Hume is a detective working for the Citizens Protection Bureau (CPB). He's partnered up with an android detective after his previous (human) one is killed during an investigation at Rekall headquarters.