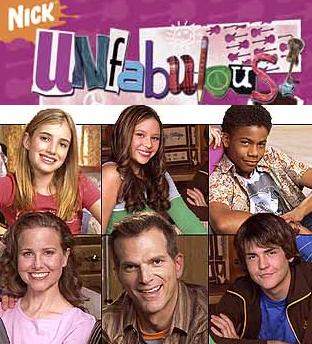 Unfabulous was a Nickelodeon original teen sitcom created by Sue Rose (Of Pepper Ann) that started in 2004. It starred Emma Roberts as Addie Singer, a Cool Loser girl with braces and a guitar. The show is all about her life, and her friends as she grows up through middle school. She starts out as 13 years old and in the 3rd season, turns 14. Her best friends are Geena (Malese Jow) and Zack (Jordan Calloway), and they attend Rocky Road Middle School somewhere on the East Coast. The first season is mostly about her awkward struggles just getting used to middle school, but her obsessive crush on Jake Behari takes most screen time of the second and third season.
Advertisement:

Notable as being the only show in the Nick Verse to not have Dan Schneider involved in writing. As a result, the show tends to be overlooked by Nick Verse fans.