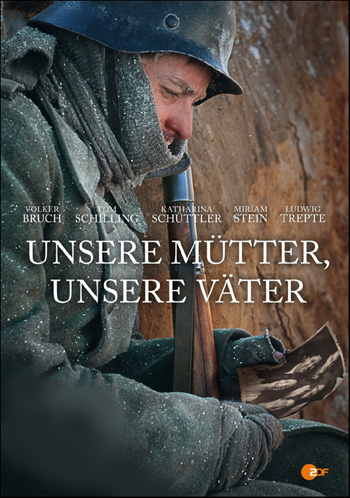 Unsere Mütter, unsere Väter (literally "Our Mothers, Our Fathers", titled Generation War in the US, UK and France) is a 2013 German drama miniseries set in World War II. Done in the style of Band of Brothers, but with German soldiers. And extra grim, since it's primarily set on the Eastern Front and The Holocaust has much plot significance.

June 1941. Five childhood friends gather in Berlin to hold a goodbye party for the three among them who are soon to head for Russia. Wilhelm Winter (Volker Bruch) and his younger brother Friedhelm have been called to serve in the Wehrmacht, while Charlotte has volunteered as a nurse. Staying in Berlin are aspiring singer Greta Müller and her Jewish lover Viktor Goldstein. The group wish each other well, and part ways in high spirits, hoping to be together again at Christmas.

Of course, it doesn't quite work out like that. And as the months and years drag by, and the fighting becomes ever more brutal, for these young people the war becomes a desperate struggle not only to survive, but to retain their humanity even while serving an inhumane regime.