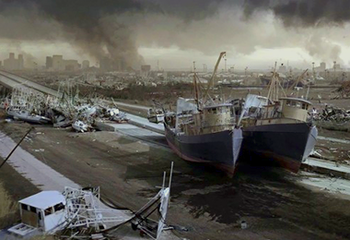 "Absolute ruin. A fallen city is like a dried and decayed corpse; it's a husk that suggests a shape without fleshing out the details. The outline of the victim is there, and the empty holes where it used to look out upon the world... but glass or eye, the critical things that make it alive and breathing are long gone."
— Sailor Nothing
Advertisement:

In an apocalyptic movie, the camera will sweep over once-populated areas, showing what was once a flourishing place.

Doesn't even have to be in movies, either. Books can do this with a description of "now abandoned structures" or whatever.

This shot can often be the setup for a Bittersweet Ending or "Ray of Hope" Ending, as after lingering on the scene for a while, living things - be they animals, plants, or human survivors, may suddenly be seen among the wreckage.

See also Ghost City, Earth All Along, Ruins of the Modern Age, and Scenery Gorn. May feature in Mordor, the Polluted Wasteland, or the Doomed Hometown after its demise.