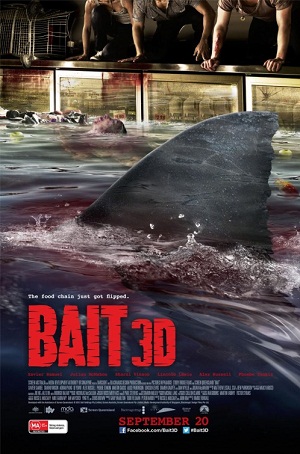 Bait is an Australian 3D killer shark film released in 2012.

In the film, set in a sleepy beach community, shoppers at an underground supermarket are terrorized by a crazed bandit when a tsunami swallows the town. Now trapped, as rushing water threatens to entomb them, the survivors discover that the tsunami has brought an unwanted visitor from the depths.

Originally, a sequel in which a shark terrorizes a flooded school in Los Angeles was in development. In 2013 however, the film was re-conceived as Deep Water in which a plane crashes in the ocean and its passengers must stay on or onboard to avoid being eaten by sharks. The film is currently on hold.