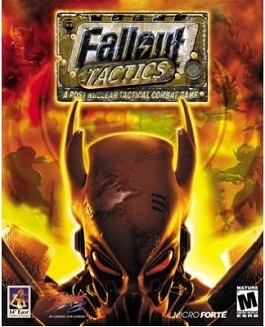 Fallout Tactics: Brotherhood of Steel is the third installment in the Fallout series, and the series' first spinoff. Released in 2001, it was developed by Micro Forte and published by Interplay Entertainment. The game took a departure from the first two games. While, at its core, still an RPG and uses the same SPECIAL system as the previous games, the focus is now on tactical combat. The official stance on the game from the current IP owners Bethesda is that it's Broad Strokes canon.

It's 2197, and the Midwestern Wasteland is an okay place to live. Sure, Chicago is in ruins, there's monsters everywhere that can tear your head off easier than you could swat a fly, almost all the water is irradiated, there are large groups of Super-Mutants who escaped the destruction of The Master's army that want to Kill All Humans, and... Actually, the Wasteland is a horrible place to live. But it's not like you have a choice.

And then everything changed. A huge storm caused gigantic airships to crash-land nearby, and soldiers in huge suits of technologically advanced armor marched out of them, setting up bases. They are the Brotherhood of Steel, and they are not happy to be here. They are the descendants of the United States military, surviving the Great War in a secret military base, and their stated duty is to protect the technology of the past, so that the future may benefit from it.

The Brotherhood is at a loss, however, for their carefully built airships have been destroyed before they could return to their home base, and they now have no way back. They will not be missed, however, because they've been exiled from the Main Brotherhood, due to an argument which has lasted years: Should the Brotherhood remain a closed faction, secret and pure, dwindling as the decades go by, or let in the clueless Wastelanders that may misuse the gifts of the Brotherhood? The survivors of the crash were the ones who decided upon the latter choice.

And now they are forced to stand by in their decision, because the majority of this new Brotherhood are now dead and buried under the rubble of the airships, and they've got to replace them fast, or the Wasteland might just swallow them up. And that's where you come in. You were one of the ones they chose, among others, to join the Brotherhood, and as a test, you will be leading a bunch of other initiates to disperse the nearby Raiders that are causing trouble. If you succeed, you will be fully incorporated into the Brotherhood; If you fail, you can just go back to the Wasteland.

You sure as hell aren't gonna fail.

Not to be confused with Fallout: Brotherhood of Steel, the Action RPG developed by Interplay Entertainment for consoles that has since been declared Canon Discontinuity.

Tropes that apply to this game shall follow. This is law.