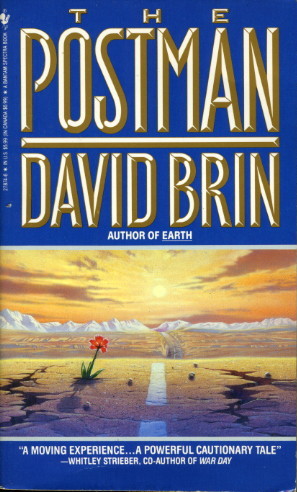 Who will take responsibility?
Advertisement:

America has been left in ruins in the wake of the Doomwar, a conflagration of various doomsday scenarios. Seventeen years later, Gordon Krantz, who was a college sophomore before it all came down, struggles to survive in a harsh environment where scavenging and violence is the norm and the vicious, fanatical Holnists reign supreme. He has been searching and searching for a place, anywhere, where "someone is taking responsibility." When he is robbed of most of his possessions, Gordon takes the uniform of a long-dead postman for warmth. The simple act of taking up this symbol soon snowballs into an elaborate tale casting Gordon as an agent of the fictional Restored United States. At first, he maintains this lie only to survive, but as hope springs up in his path, the lie becomes something more.

This 1985 novel by David Brin is most famous for an adaptation made 12 years later that nearly killed Kevin Costner's career.