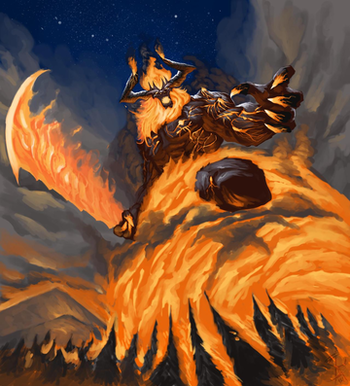 See me rise the Mighty Surt, Destroyer of the Universe; Bringer of flames and endless hurt, scorcher of men and earth!
Image

.
White Mage: Did you feel that?
Black Belt: What?
White Mage: A great disturbance in the order. As if millions of voices cried out to say "Oh Shit".
[elsewhere...]
Matoya: Stupid Light Warriors must have broken my crystal. I keep asking for Lotto numbers and all I get is "The Destroyer is Manifest".
— 8-Bit Theater
Advertisement:

This is a god or other entity associated with destruction.

Often, this guy's job is to cause The End of the World as We Know It. He will read the final scroll, sound the trumpet, loose the beast, and sit back and watch the show (or take a starring role himself). He may not actually be evil per se, but the hero is very likely going to be trying to stop him. Or prevent or reverse the conditions that require him to perform his duties.

Alternately, he can simply be a natural part of Eternal Recurrence, representing the destruction of the old that must take place to allow room for the new. His name may be associated with The Cycle of Empires, Order Versus Chaos and Gaia's Vengeance. Therefore, not an Omnicidal Maniac by default; a destroyer deity may just have a God Job to perform without any malice attached. Depending on the perspective, this can either signify Dark Is Not Evil, Blue-and-Orange Morality, or Light Is Not Good.

The Grim Reaper is a Sub-Trope — incarnations of death should go on that page unless they also have a more general role in destroying things.

Contrast The Maker (if the maker happens to be God, the destroyer deity is likely to be The Anti-God), though some gods may be enough of a multitasker that they combine both the creator and destroyer god roles. Compare Horsemen of the Apocalypse, Beast of the Apocalypse and War God. See also Apocalypse Maiden, where it's some average mortal (of either gender). They can intersect if the mortal is an Angel Unaware or an Amnesiac God.