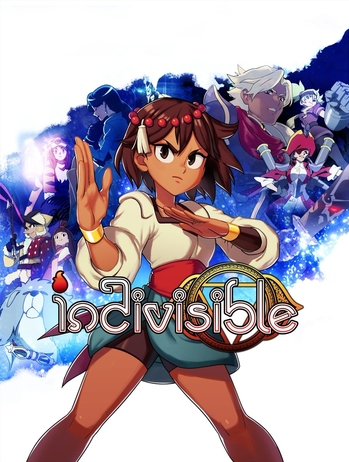 Indivisible is a Action RPG-Platformer by the now-defunct Lab Zero Games, creators of 2D fighting game Skullgirls. The game mixes the exploration and platforming of Super Metroid with a combat system reminiscent of tri-Ace's Valkyrie Profile and features the musical stylings of Hiroki Kikuta of Secret of Mana fame as well as an animated intro by Studio TRIGGER (directed by Yoh Yoshinari, creator of Little Witch Academia) with Titmouse also contributing animation. Indivisible was released on October 8th, 2019 for PC, Mac, PlayStation 4, and Xbox One, with the Nintendo Switch released on April 28th, 2020.
Advertisement:

The game tells the story of Action Girl Ajna (AHZH-na). When local warlords attack her village, Ajna discovers that she has the power to absorb certain individuals into her being. In addition to this, she learns that fusing with these "Incarnations" allows her not just to summon them in battle, but also grants her access to new weapons and abilities.

Determined to confront the warlords that attacked her village and find out more about her strange new abilities, Ajna sets out on a globe-spanning quest that will reveal her true nature and much more.

was launched on October 5th, 2015. Released alongside was a playable prototype that allows players to get a taste of the game's platforming and combat, currently available on PC, Mac, and PlayStation 4. Following a twenty-day extension at the end of its initial run, the campaign met its financing goal on December 2nd with three days remaining. The campaign proper ended on December 5, having reached almost $1.87 million, but Lab Zero continued to fund the game using Indiegogo's InDemand service to reach further stretch goals.

Sadly, it was confirmed that due to MikeZ's troubles and the resulting closure of Lab Zero Games in 2020, the game will cease development