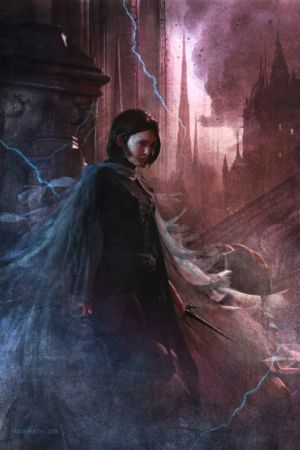 This page is for the original Mistborn trilogy. You can also read about the Sequel Series, Wax and Wayne.

Long ago, a conqueror and philosopher was acclaimed as the Hero of Ages and sent to vanquish an ancient evil known only as the Deepness. The nature and character of the threat has been lost to the mists of time, but the Hero was evidently successful in his quest, as the Deepness was destroyed and the Hero returned in triumph, but not without great cost — the sun became red, Ashmounts filled the sky with ashes that forevermore fell to the earth, plants withered and turned brown, and mysterious mists (whispered by the superstitious to be sentient and malevolent) enwreathed the lands by night. But humanity survived, even prospered, and years passed.

The Hero, having unlocked the secret to immortality, installed himself as the Lord Ruler of the world and became their deity. He granted those who supported him in his quest titles and lands of great power and influence, and a magical power known as Allomancy. Those who did not support his rule were turned into the downtrodden peasant race, known as "skaa", who have since worked the fields in virtual slavery for their masters. A thousand years later the ruling class consists of the decadent descendants of the Lord Ruler's ancient companions, who hold massive balls and festivals in their stone keeps as the rest of the world slaves away. The Lord Ruler impassively reigns over both sides as king and god with his bureaucratic priesthood, his army of beastlike monsters known as koloss, and his brutal, near-inhuman enforcers the Inquisitors. The Lord Ruler, immortal, with unlimited power, keeps the world stable and relatively prosperous under his autocratic rule, and has reigned for so long that most people consider him virtually unstoppable, a force of nature.

The main plot begins with a rebel that seeks to overthrow the Lord Ruler. That man is named Kelsier, who arose from the ranks of the skaa. Kelsier was once a thief, blithely stealing from the nobility for the sheer joy of it, until he was betrayed, captured, and sent to the Pits of Hathsin, the Lord Ruler's most brutal prison, a mine where prisoners are forced to find one piece of the precious metal atium every seven days or face execution. No man had ever escaped from the Pits — but Kelsier did, earning him the epithet "the Survivor of Hathsin" and a seething desire for revenge against the Lord Ruler. In the Pits, Kelsier had come into his powers as a Mistborn — a special, powerful type of sorcerer that comes along only very rarely, and supposedly only among the nobility. While most magicians ("Mistings") can "burn" only one type of the eight allomantic metals (iron, steel, tin, pewter, brass, zinc, copper, and bronze), generating a very specific effect, Mistborn can burn all eight and some extra ones besides, giving them extensive power and versatility. Among the nobility, Mistborn are mostly used as elite assassins, but Kelsier had other plans.

Gathering up many of his old friends from the criminal underworld (most of them themselves allomancers), Kelsier begins raising the skaa revolution once more. Unlike previous attempts at rebellion, however, who mostly tried a purely military strategy and were soundly defeated every time they raised their head, Kelsier plans to hit the Lord Ruler at the place where he's most vulnerable: his vaults of atium. As for the Lord Ruler himself, Kelsier claims to have a trump card: the so-called "Eleventh Metal", obtained on the edges of the world where even the Lord Ruler has no power.

His plans look more prosperous when Kelsier's double-agent brother detects these powers in a Street Urchin named Vin. Unbeknownst to her, she also has the power of a Mistborn, so Kelsier quickly recruits her and begins her training. With two Mistborn and the support of the underworld, the rebellion churns along at a pace it never has before, and slowly the populace begins to believe in them.

Part Heroic Fantasy, part heist novel, Mistborn: The Final Empire is the first novel in Brandon Sanderson's Mistborn trilogy. It was followed by The Well of Ascension and The Hero of Ages, dealing with the return of the Deepness and the ramifications of bringing down a thousand-year empire. There is also a sidestory eBook, Mistborn: Secret History, which details several important events that all the characters were unaware of. Note that this sidestory is full of spoilers, to the point that the author suggests that people not read it until finishing the original trilogy, and possibly the first three books of the Sequel Series as well, on the first page.

, The Well of Ascension

, and Hero of Ages

on his website detailing the development of the series and clarifying various plot points. Note that they're chock-full of spoilers.

This page is split into folders depending on which book each trope occurs in. Needless to say, the folders for books 2 and 3 have massive unmarked spoilers for the previous books. Moreover, there may also be misfiled or unhidden spoilers for later books, or the sequel series. Please fix them whenever possible.