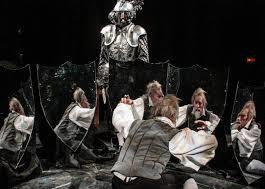 Don Quixote has met his enemy, and it is him
Darien Fawkes: C'mon, didn't you have an invisible friend as a kid?
Bobby Hobbes: I had invisible enemies.
— The Invisible Man, "Ralph"
Advertisement:

The Imaginary Friend is a common trope in fiction, in which it bears little resemblance to the counterparts in Real Life (after all, that would be boring, like real amnesia). Imaginary friends in fiction can be holograms, spiritual projections, ghosts, psychological conditions, stress or injury related psychosomatic conditions, even split personalities. And because it is more entertaining, sometimes they aren't very friendly, or are actively malign towards their host/audience, or perhaps friendly to their host alone, and dangerously less so to everyone else.

Often they serve as a plot device to drive the person crazy, torment them, tempt them, or subvert their beliefs and actions in some way. Sometimes representing deceased people or perverted versions of people known by the victim, such as murder victims. Examples are not quite the level of Enemy Within, in that they do very little to actively harm the host and rarely exert any kind of physical control. Also, the host most often will not tell anyone, or at least keep the information with a select few, knowing that they won't be believed (insane asylums are no place to be alone with your imaginary enemy).

Sometimes, Your Mind Makes It Real, and the more you believe in the enemy and the more strongly you fight it, the more dangerous it becomes. See also The Killer in Me, Enemy Within and Enemy Without. This trope is not related to Unknown Rival.