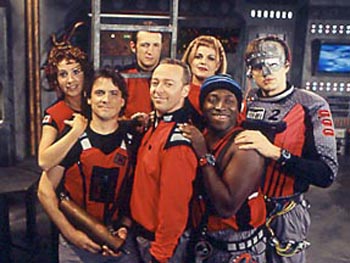 The crew from season two onwards
"We are in 2034, the situation on Earth is catastrophic. The ozone layer has been completely destroyed by the Carbon dioxide from cars, the chemical industry and spray cansnote le push-push en ca-cannes. Results: The Earth is cooking under the sun's rays, harvests are burning, there's almost no drinking water left and sunscreen manufacturers are becoming rich. The situation becomes urgent: A new planet must be found to relocate 6 billion moronsnote 6 Milliards de Tatas. It is thus that on October 28th 2034, the spaceship Romano Fafard leaves Earth for the edges of the universe. Where the hand of Man has never set foot..."
- Season 1 and 2 Intro
Advertisement:

Dans une galaxie près de chez vous (In A Galaxy Near You), abbreviated as Dans une galaxie, DUG or DUGPDCV, is a cult French-Canadian series parodying the sci-fi genre, most notably Star Trek and Lost in Space. It was written by Claude Legault and Pierre-Yves Bernard. The series is first and foremost a comedic show filled with absurd humor, but has its moments of heart-rending drama and serious, if not slightly anvilicious, environmental message.

The premise is that in the year 2034, the Earth has become so polluted it will soon be unable to sustain human life. The World Federation pulls its resources together and sends the spaceship Romano-Fafard and a crew of seven to find a habitable planet for humanity. However, not long into the first episode, the crew is informed that there are no habitable planets in the Milky Way Galaxy, and they will have to venture outside the Galaxy, effectively rendering all communications with Earth impossible. In their travels, the crew members explore far-flung new worlds (including a Casino planet named O'Vegas, a planet covered with nothing but telephone poles and another planet filled with dogs) and meet odd (if sometimes inexplicable) characters (including Réal Estate, a planet salesman; a Sith lord; and even the devil himself).