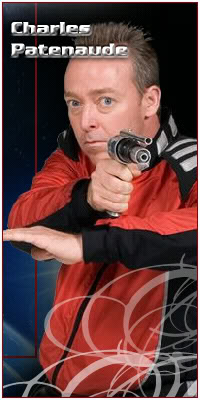 Played by: Guy Jodoin
"If you lose hope, get out of your houses and look up to the starry night and remember the crew of the Romano Fafard is there, looking for a new planet where we could all move, somewhere, in a galaxy near you. And amidst all the uncertainties that come with this mission, one fact is clear: we won't be back in time for supper." note Si vous perdez espoir, sortez de vos maisons et regardez dans la nuit étoilée, et dites-vous que l'équipage du Romano-Fafard est là, cherchant une nouvelle planète où nous pourrons tous déménager à quelquepart dans une galaxie près de chez vous! Et parmi toutes les incertitudes que soulève cette mission, il reste une chose de sûre: Attendez-nous pas pour souper.

He is the ship’s captain and Valence’s love interest. Brave and fair, he always looks out for his crew. Famous for his bad speeches and proverbs. 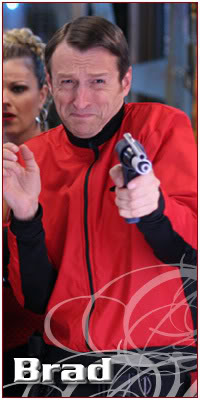 Played by: Stéphane Crête
"Why is it that every time someone says my last name, I always feel like I'm about to get hit?" note Pourquoi lorsque quelqu'un dit mon nom d'famille, j'ai toujours l'impression que je vais m'faire peter 'a gueule?

He is the scientist and hated by everyone else on the ship. He was second officer until episode 58. Brad is a liar, a manipulator, a dirty bastard; he is pretentious, coward, egoist, lazy, lousy, etcnote Note that Brad himself sees all these traits as virtues. His only known good trait is that he’s very clean. 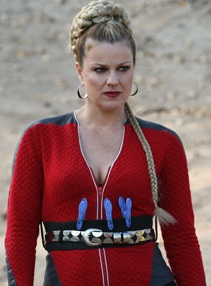 She is the ship psychologist and the Love Interest to the Captain. She has a tendency to speak in overly complicated psychobabble before repeating it in Layman's terms. 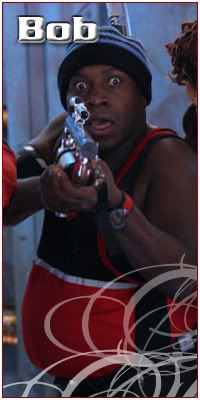 The ship's pilot. He's a bit of a ditz who enjoys eating a lot, and he's the only pilot on Earth who can work the Romano Fafard's manual clutch. 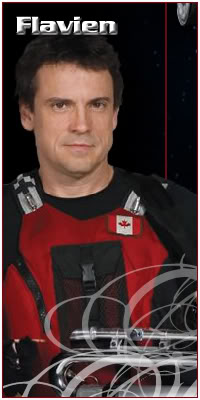 The ship's radar operator, communications specialist and second officer after episode 58. In the final episodes he was revealed to be a Half-Human Hybrid. 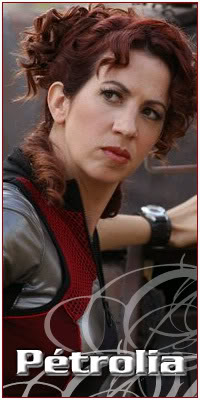 The ship's medical officer and mechanic, she was part of a Love Triangle with Flavien and Bob. She eventually chose Flavien over Bob, but managed to stay in good friendly terms with him. She is Serge's creator, having made him with lawnmower parts. 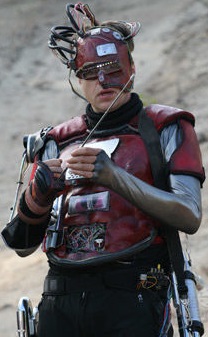 Created by Pétrolia, Serge is an android and is the ship's defender. Originally looking much more human, as time passed he took more damage and Petrolia was forced to repair him with what she had on hand.

Only appeared in the first season. He was the number one mercenary of the 21st century (and ex-high public school teacher) who served as security chief (and more or less a One-Man Army) on the ship. Was lost on a savage planet while chasing the fugitive Mirabella.

Only appeared in the first season. She was the ship's first doctor, actually a con artist who snuck onto the ship to escape the authorities using false credentials. Valence found out her secret early on but kept it to herself for the sake of the mission. Was Bob's Love Interest, and fled the Romano Fafard after her duplicity was found out.