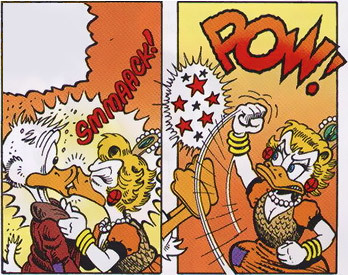 A one-two right to the kisser.
"I am going to save you both. AND THEN I'M GOING TO KILL YOU!"
— Agatha Heterodyne to her beaux, Girl Genius
Advertisement:

This was a once very popular trope in The Western and similar films, where the rogue protagonist has been away for a long time and returns to his old flame. She is initially delighted to see him after such a long time and falls into his embrace and smooches him, but then her mind says, "Hey, this is the bastard that left for 10 years, dammit!" and gives him a wallop with a proclamation like "You beast!"

Then there's the case when only one person is a willing participant A in a kiss and they end up on the end of the unwilling person B's fist — usually A is a man and B is a woman because of they Wouldn't Hit a Girl and A Man Is Always Eager (for kissing or otherwise).

A variation on this trope is that the kisser thought the kissee had been killed. Expect a line to the effect of, "How dare you make me worry like that!"

It is less common these days, but it does show up from time to time. Sometimes combined with Slap-Slap-Kiss to get a sort of Slap Slap Kiss Kiss Slap Slap effect.