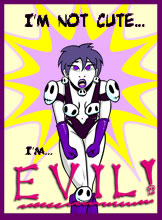 is a super-hero parody comic where not only are all the principal characters are punch clock heroes and villains, but many other stock characters (from the Distressed Damsel to the mooks) are ALSO just working their day jobs. It's set in a world where the entire economy is based off the merchandising and media sales from the public conflicts of Supers (and the government owns a large stake in it). Additionally, everyone has a power — most of them just suck in a comic book sense, like having all the small, lost objects show up in your dryer, or immunity to cholesterol

The main character is Skull Girl, who is naive, sweet, energetic, undeniably cute and amazingly competent, yet for all intents and purposes she is a Minion with an F in Evil (at least while wearing her Stripperiffic villain costume — which she designed purposely uncomfortable in an attempt to make herself cranky and keep herself 'evil'). She is a new graduate, and after a series of failed attempts to enter the industry, finally gets her break.

The titular "Super Temps" is actually the name of the biggest super temporary-employment agency which supplies the 'flavour of the week' antagonist as well as occasionally one-shot heroes for whatever capers have been planned.

The cast is large and quirky, and probably the most notable element of the comic is that it's a super-hero comic with no actual evil characters (and very little real heroics) in it.