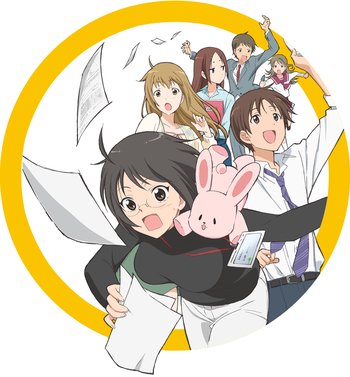 In a certain Health and Welfare Department of a certain government office at a certain city in Hokkaido, three newcomers join its ranks as civil servants. They are Lucy (etc.) Yamagami, Saya Miyoshi and Yutaka Hasebe, each of them with distinct and colourful personalities. Now they must confront the perils of their work, be it its mundaneness, or the irate public, or perhaps... even amongst themselves?

Servant × Service is a Work Com Yonkoma by Karino Takatsu, the creator of Wagnaria!!. It was serialized from 2007 to 2014, though it moved between magazines (starting in Zoukan Young Gangan, then moving to Zoukan Young Gangan Big in 2011, and finally to Monthly Big Gangan from 2011 until its conclusion). An anime adaptation by A-1 Pictures aired in the Summer 2013 season. The manga is licensed by Yen Press in North America and all 4 volumes have been released as a digital-first release in November 2015.