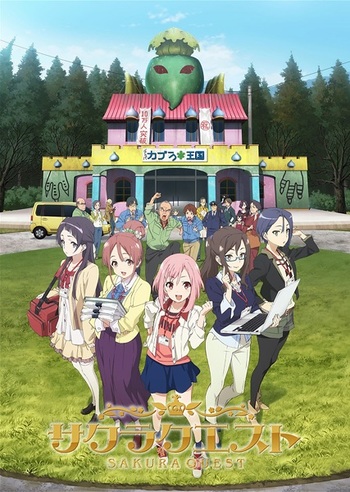 Sakura Quest follows Yoshino Koharu, a young girl trying to look for a job in Tokyo, but who is only met with a series of rejections. However, she has a seemingly lucky break when she receives a job offer to work with with the tourism board of the economically struggling Manoyama town as their "Queen." With no other choice, Yoshino accepts the offer and travels to Manoyama only to find out that she was hired based on a case of mistaken identity and that her contract term is for one year instead of the one day, as she had initially thought. With nowhere else to go, Yoshino reluctantly becomes Queen of Manoyama.

In the wake of a nationwide movement during the Bubble economy period, Manoyama is aiming to revive itself through a "mini-nation" tourism program; hiring the five leads as travel ambassadors with Yoshino as their queen. The series will follow a year's time of the five girls as they work in the tourism agency of a small failing town in an effort to reinvigorate it.

Sakura Quest is a 25-episode anime original Slice of Life Work Com created by P. A. Works for the Spring 2017 Anime season. Sakura Quest is something of a spiritual successor to fellow PA Works series Hanasaku Iroha and Shirobako. Through the protagonists' attempts to revitalize the town themes that are examined as a side effect includes the culture clash between City and Rural living, tradition vs adaptation, and the desires of what the young adults protagonists want out of their lives.

. The simuldub began streaming on May 9th, 2017, with releasing a new dubbed episode every Wednesday at 9PM EST.