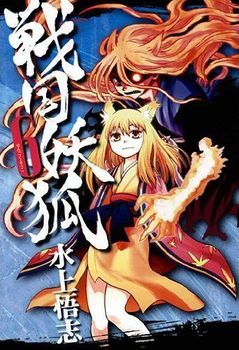 "Look at me, my younger self. I haven't lost a single thing, because I still have all the warmth that everyone gave to me. And that warmth has piled up over the years, so that even in the middle of a blizzard, it can still bring a smile to my face. Take your time now, and cry. Cry until you find the warmth left by those who are no longer with you, so that you may finally laugh once more."
Advertisement:

Sengoku Youko is a manga written by Satoshi Mizukami, who is best known for writing The Lucifer and Biscuit Hammer and Spirit Circle.

"Stop your evil deeds and take the right path!" - that is the creed of Tama and her younger step brother, Jinka. The two demon siblings travel the country to stop the deeds of all evil doers, along with a cowardly swordsman they picked up along the way, Hyoudou Shinsuke. Their travels lie with many twists and turns, as well as wacky characters they'll meet along the way.

The manga ran in Blade Online from December 2007 to May 2016, with 99 chapters split across two parts.