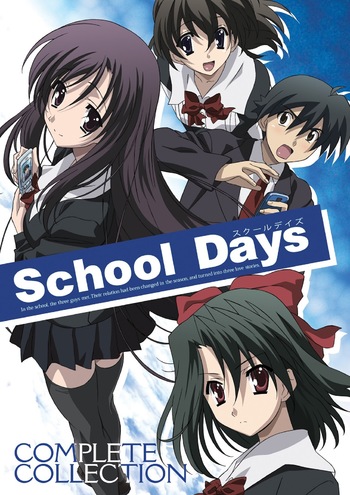 This is a Harem Series... gone wrong.
"If you keep a photo of the person you like on your cellphone for three weeks and nobody finds out, your love will be realized, huh? That's just stupid."
— Makoto Itou
Advertisement:

School Days is an Animated Adaptation of the Visual Novel of the same name. Just like in the original Visual Novel the story centers around Makoto Itou who spends his days watching a beautiful girl named Kotonoha Katsura from a distance, until one day he gets the opportunity to meet her with the help of her newfound friend Sekai Saionji. Eventually Makoto finds himself involved in a Love Triangle with his two friends that will put their emotional threshold to the ultimate test.

While the original game was a story that aimed to subvert the Harem genre with its many twists and dark themes, this anime series presents a story that starts out with a happy innocent mood, but gradually becomes much darker, and by the end plummets deep into the pits of despair, angst, and violence…

…and laughs, depending on how much you hated the main character by the end. Ultimately, the anime is like watching the worst route possible on the visual novel.

Wait no, scratch that, not even the worst possible path in the visual novel reaches the level of messed up irrationality that the anime presents.

There are also two OVA episodes, Valentine Days and Magical Heart Kokoro-chan, that exist in Alternate Continuities. Especially in the latter's case, which turns most of the main females into Sentai and/or Magical Girls with liberal amounts of randomness and School Days-style fanservice and gore.

Finally, there's also a manga, which is much more family-friendly than the anime. Makoto, much less of a Jerkass here, manages to resist Sekai for most of the run; when he finally gives in to temptation, he feels so bad about it that he is prepared to break up with her... until stuff happens. Almost more disturbing than the anime, in a subtle way. There's a manga adaptation for Cross Days as well, which follows Yuuki, the protagonist of the game, and which gets dubious props for somehow making Makoto even more of a jerk than he is in the anime. No, really.

Discotek Media licensed the anime and released it on DVD in 2015; they also announced a Blu-ray release for Spring 2017.

Makoto ABSOLUTELY had that coming.

Makoto ABSOLUTELY had that coming.