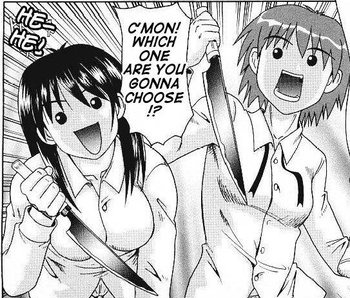 Personally, I'd prefer the high-carbon steel to the stainless, plus heft and grip make a big difference...oh, wait, this is about the girls?
Advertisement:

A Love Triangle where at least two of the members are mutually crazy in love with the hypotenuse. Leads to a massive amount of drama and generally lots of violence and attempts to Murder the Hypotenuse, only now it's working both ways, and if the third member of the trio is not mentally unstable and violent, expect them to suffer quite a bit. Sometimes though, the third member of the trio can be as crazy, if not more so, than the aforementioned crazies. And if they aren't, they may be soon enough thanks to the other two. It may overlap with Bisexual Love Triangle if there is a Depraved Homosexual or Psycho Lesbian character.