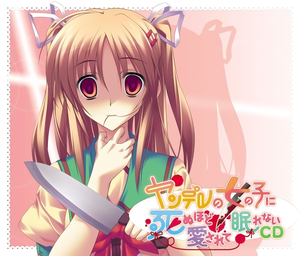 Let’s be together forever and ever...ONII-CHAAAN!
Advertisement:

Yandere no Onna no Ko (Full title: Yandere no Onna no ko ni Shinu hodo Aisarete Nemurenai Translation Yandere girls love me to death so much that I can't sleep) is a series of Drama CD tracks based about three different stories with yanderes. The listener is in the position of the unfortunate main character, an Ordinary High-School Student who is loved by various girls who happen to be yandere. Each track is focused on each girl's point of view and a Downer Ending for the poor protagonist. It should be noted that in each CD, the protagonists are three different guys, respectively.

Here's the Character Page. Each CD has its own official website: 1st