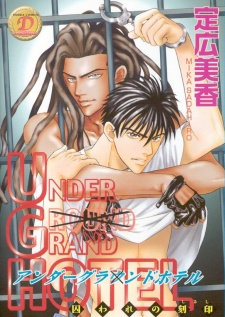 Under Grand Hotel is a Yaoi manga set in a fictional U.S. prison that was built entirely underground. Most of the prisoners confined inside will never again see the light of day, as most have been put away for life sentences. The story follows Owari Sen, a young Japanese student sent there for first-degree murder. Though his eyes we see the brutal life of the prison its inmates call the Under Grand Hotel.

The major characters are: Swordfish (a Depraved Bisexual), the prison boss (or "shut-call"), Walter (the prison barber), and The Warden, who is drunk on his own power.

The manga is known for being graphic and brutal. The majority of the plot seems to focus around prison rape.