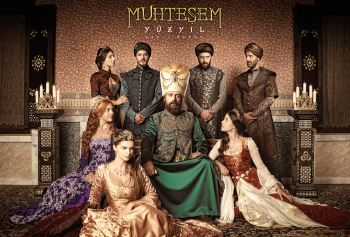 Counter-clockwise from center: Sultan Süleyman, Şehzade Mustafa, Mahidevran Sultan, Haseki Sultan Hürrem, Mihrimah Sultan, Hatiçe Sultan, Rüstem Pasha, İbrahim Pasha.
"And for what did this happen? 'For the Sultanate'. What is this you call the Sultanate? Wealth and property, land and territory? To have power over the destinies of others? Was it worth it, Süleyman?"
—Mahidevran Sultan, 4.29
Advertisement:

Magnificent Century (Turkish: Muhteşem Yüzyıl) is a Turkish Soap Opera based on the life of Süleyman the Magnificent, the longest reigning sultan of the Ottoman Empire.

After the death of his father, Sultan Süleyman is called to reign over the ever-expanding Ottoman Empire at 26 years of age. He resolves to uphold the justice of the law and make the Ottoman Empire greater than it has ever been.

Thus begins his romance with Hürrem, a Crimean concubine in his harem. Originally named Aleksandra Lisovska she was transported to his palace in Istanbul along with other slaves for his harem. The bold woman detests the people who captured and sold her, resisting her captors and wishing to follow her deceased family in death, until she falls in love with the Sultan.

However, this earns her the ire of Mahidevran Sultan, mother of Süleyman's firstborn son, and Pargalı İbrahim Paşa, the Sultan's closest advisor and right hand man.

The show begins with Süleyman's ascension to authority, but the focus of the series are the workings and intrigue of the Sultan's inner circle and the rivalries between members of the household. The budding romance between İbrahim and Hatice, Süleyman's sister, the rivalry between concubines and heirs and the manipulations taking place behind the scenes.