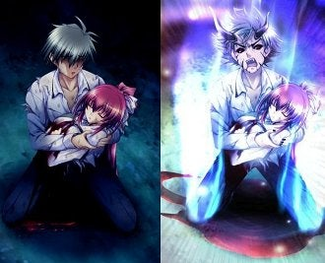 In Soviet Russia, the cutie breaks YOU.
"Evil is just a word. Under the skin, it's simple pain."
— Eleanor Lamb, BioShock 2
Advertisement:

As James Baldwin once said, society's deadliest creation is a person with nothing left to lose.

This is a character with omnicidal and/or Ax-Crazy tendencies, or a character who wants to destroy everyone in the story, and is suddenly in a position to do so (on a small or large scale); but in contrast to other characters, he/she has some plausible, outright tragic reason to do so. In some cases, the other characters outright sympathize with this one (whether or not the audience does too is out of the equation here), all the while accepting that they must be stopped. Sometimes, the character is even portrayed as likeable, just... not with the right mindset.

The essential element is that the destroyer has been pushed beyond all reason. This may or may not make them The Woobie, but either way they are portrayed as having a crappy existence. This is a character who, by definition, is constantly beaten up, kicked around, and lives an all-around miserable life. Should they lose everything and everyone they trust (be it through betrayal or in other cruel ways), and then just so happen upon the instrument of revenge against the cruel, heartless world that brought them so much pain, one need not be a genius to figure out whom the character will cast their hateful gaze upon. Think of this person as a Jerkass Woobie, only with the jerkassery replaced by insanity (though many characters do fulfill both tropes).

This trope is less about the Sliding Scale of Villain Threat and more about how much a character has been broken — physically, mentally, and emotionally — before they finally snap and blame the whole world for all the crap they have been through. Of course, they must crack and pose a sudden threat of some sort, to the characters and/or the setting. And some of them do get their finger on the nuke trigger. In a few extreme cases, they themselves are the nuke.

A character who is a Woobie Destroyer of Worlds can be very high up on the Sliding Scale of Villain Threat and/or Sliding Scale of Villain Effectiveness while being very low on the Sliding Scale of Antagonist Vileness. Rather than hatred, the audience feels pity for this villain and wants to see them stopped nonviolently so they don't cause any more destruction or loss of life (or actively cheers them on, especially if their victims deserved it and were responsible for their suffering). If the Woobie Destroyer of Worlds has to be killed to stop his destruction spree, it makes for prime Alas, Poor Villain material especially if he regains his sanity as he's dying.

Not to Be Confused with Mike Nelson, Destroyer of Worlds, where a bumbling but otherwise nice person accidentally destroys actual worlds, leading to What the Hell, Hero? and Nice Job Breaking It, Hero moments.

This trope is more closely related to Break the Cutie, Freudian Excuse, Bullying a Dragon, Who's Laughing Now?, and Then Let Me Be Evil. May have emerged as a deconstruction of the Cosmic Plaything.

Not the same as Put Them All Out of My Misery, which is the trope for characters who rationalize their destructive behavior by insisting that society, or the earth, must be somehow cleansed or punished for some past injustice, making it the inverse of this trope. Motive Rant, Cry for the Devil, and Villain Has a Point are more typical of that trope. For characters, especially villains somewhere in between this trope and that one, see Jerkass Woobie. Also note that overlaps between the two tropes are not impossible.

May overlap with Death Seeker, if they want to die, but intend to make sure that everyone else goes first. Likely to be a Draco in Leather Pants for some of the audience. Compare Sympathetic Sentient Weapon when they're in employ of someone/some group rather than acting on their own. May also overlap with Fallen Hero, where a villain in question was once a hero until something bad and tragic happens.

And just to be clear, a character does not have to literally destroy worlds to fit this trope.

For actual world-destroying tropes, see Why You Should Destroy the Planet Earth.

There are several unmarked spoilers ahead! You have been warned.

This trope is no longer considered YMMV because not all examples here need to be sympathetic to the audience.

Count Bleck's reasoning for his attempted destruction of all worlds is because his girlfriend was taken away from him by his own father, causing him to lose meaning in the world.

Count Bleck's reasoning for his attempted destruction of all worlds is because his girlfriend was taken away from him by his own father, causing him to lose meaning in the world.