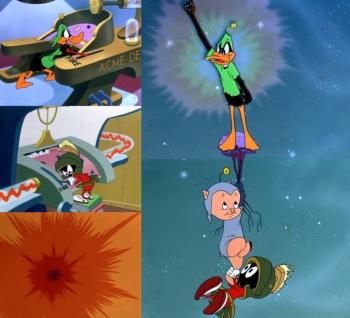 Two characters are fighting over something and in the process the thing they are fighting over gets broken, damaged, or destroyed. Often overlaps with Nice Job Breaking It, Hero. May be seen as poetic justice. Usually implies a moral about how fighting is bad. A frequent variation is to have two Genre Blind characters try to wrest a piece of paper from each other, only for it to split.

If the thing that is "broken" is a contest that either would normally win, this may lead to a Dark Horse Victory. Compare No MacGuffin, No Winner. The rivals may try to save face by claiming "We Win, Because You Didn't". Contrast Let's You and Him Fight.

A fight among the Loud Kids over the best seat in the van causes ends up destroying the van.

A fight among the Loud Kids over the best seat in the van causes ends up destroying the van.