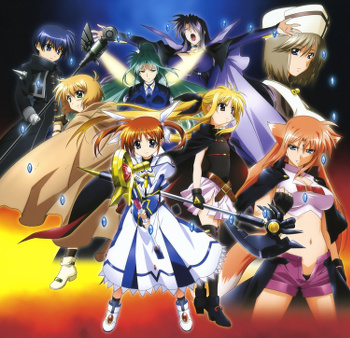 "Because we both have the same goal, there might be no way we can avoid fighting like this. But I want to know! Why does she have such lonely eyes...?"
Advertisement:

Magical Girl Lyrical Nanoha is the first series in the Nanoha franchise.

It starts with a typical cookie-cutter plot: twenty-one dangerous artifacts of incredible power called Jewel Seeds have fallen to Earth following a cross-dimensional accident. A mage named Yuuno is badly injured while attempting to retrieve them and is discovered half-dead by Nanoha Takamachi, an ordinary 9-year-old elementary schooler.

Having no other choice, Yuuno lends his "Intelligent Device" to Nanoha, transforming her into a Magical Girl so that she can neutralise and collect the Jewel Seeds on his behalf.

Just as Nanoha is getting used to her new duties, everything changes when she is confronted by Fate Testarossa, a Dark Magical Girl who is also attempting to capture all the Jewel Seeds. However, Nanoha senses something pained and fragile behind Fate's ice-cold exterior, and resolves to discover the truth even if she has to beat it out of her.

Thus ends the introduction of Magical Girl Lyrical Nanoha, one of the most popular modern Magical Girl anime due to the odd mix of Magical Girl elements with incredibly flashy fight scenes. The premise of "Magical Girl meets Gundam" led to a unique and successful show.

A movie titled Magical Girl Lyrical Nanoha The Movie 1st was released in 2010 and retold the original plot, but more in the style of the later seasons. It is treated by sort-of canon as an In-Universe biopic, so it is considered its own continuity. A companion manga titled Magical Girl Lyrical Nanoha Movie 1st The Comics was also released at the same time. Initially, it appeared to be a prequel to The Movie, but it was later revealed to be yet another Alternate Continuity. Both the series and the movie have supplementary Slice of Life Drama CDs called Sound Stages. From 2013 to 2016 another manga based on the same season was released, titled Original Chronicle Magical Girl Lyrical Nanoha The 1st, a more straightforward adaptation with some All There in the Manual material reincorporated.

The anime was licensed and dubbed in North America by Geneon, but is now out of print. After Geneon USA shut down, Funimation took over the distribution of the original series and its sequel Magical Girl Lyrical Nanoha A's until the licenses for both expired in 2011.

The movie manga provides examples of:

Starlight Breaker is Nanoha's most powerful technique, which condenses all the leftover mana scattered around the battlefield into a single blast of destructive power.

Starlight Breaker is Nanoha's most powerful technique, which condenses all the leftover mana scattered around the battlefield into a single blast of destructive power.