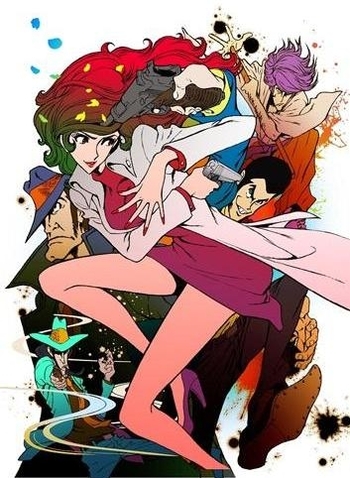 "...to steal and steal again is my greatest carnal pleasure
and I stake my life on it.
A sexy prison from which there is no escape...
...so if you want to gaze at me
first cease everything you are doing
and let your heart be the only thing to stir."
—Lyrics to the show's opening theme, "New Wuthering Heights"
Advertisement:

Lupin III: The Woman Called Fujiko Mine is a 2012 anime series based on Monkey Punch's long-running Lupin III franchise. Produced by TMS Entertainment and Po10tial, it began airing on NTV on April 4, 2012 as part of a celebration of the 40th anniversary of the completion of the first Lupin manga. The series focused on the franchise's heroine, Fujiko Miné, as she takes on various missions and encounters other characters in the Lupin universe. The opening theme was "New Wuthering Heights" by Naruyoshi Kikuchi and Pepe Tormento Azcarar feat. Ichiko Hashimoto, whilst the ending theme was "Duty Friend" by NIKIIE. In addition, music direction was handled by legendary anime director Shinichiro Watanabe.

Sayo Yamamoto was the director of the series, making it the first Lupin title to be directed by a woman. The head writer was also a woman, Mari Okadanote  She has helmed a number of well-known anime over the years including Black Butler, Toradora!, and Vampire Knight. The character designs were handled by Takeshi Koike, best known for the film REDLINE, and opted to eschew the standard Miyazaki-inspired designs of previous decades in favor of a much darker, sketchier aesthetic more in line with Monkey Punch's original comics. Fujiko Mine, unlike previous Lupin anime adaptations, is also much closer to Monkey Punch's original creation in tone and in the portrayal of Arsène Lupin III. The series is darker, more serious, and more sexually oriented than its predecessors. It's also the first series in which Lupin is not the main protagonist – there are some episodes where he does not appear at all.

This was the first full Lupin series to use the new voice actors for Fujiko, Goemon, and Zenigata (Miyuki Sawashiro, Daisuke Namikawa, and Kōichi Yamadera respectively); they had made their debuts in the annual TV special a few months earlier.

In North America, Funimation simulcasted the series with English subtitles on their website. Several months later, they announced the series would be given a proper home video release, complete with English dub using a combination of their own actors from previous TV specials and actors from the Lupin III: Part II TV series.note  Admittedly, this only happened due to Meredith McCoy and Philip Wilburn retiring. Funimation's license later expired in August of 2018, leaving the series in limbo for a period of time before Discotek Media acquired the license in 2020

Three theatrical films by Takeshi Koike serve as sequels to the series, but the first two shift the focus to other Lupin characters: Gravestone of Daisuke Jigen and Goemon Ishikawa's Spray of Blood. The third one, Fujiko Mine's Lie, returns focus to Fujiko.