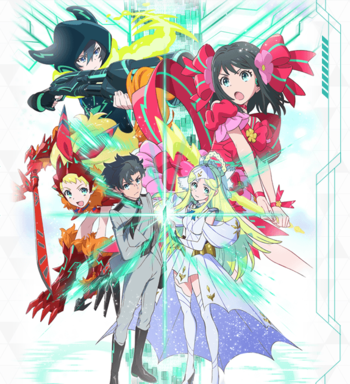 Logic Drive!
We have discovered the truth one day. It transcends even the building blocks of all matter, the atom. A certain concept which governs emotions, talent, memories, and those with neither shape nor form. The existence of "Logic". Even the Gods which exist due to the "Logic" of other worlds have found a common place in this world. Battles where the survival of these worlds hang in the balance are about to begin.
Advertisement:

In the year L.C.227, the world of Septpia faces great danger. Following the conclusion of a hundred-year war in the world of Tetra-Heaven, the losing side now seeks refuge in Septpia, and their intentions are anything but pure. To protect the innocent civilians, the governments of the world are forced to create a special police force dubbed Another Logic Counter Agency, or ALCA. Comprised of Humans capable of harnessing Logic and the Gods that have allied with Septpia, Logicalist's and Covenanters fight side by side to defend the world.

The story of Luck And Logic follows Yoshichika Tsurugi, a young former Logicalist who was discharged after losing the power of logic at an incident in Hong Kong. Living now with his father and younger sister, Yoshichika is no different from the average civilian. One day though, he met the Goddess Athena, who had found his lost logic. Now capable of fighting for ALCA again, Yoshichika and Athena must work together to stop all who threaten Septpia.

The Luck And Logic Anime aired from December 2015 to March 2016, comprised of 12 episodes.

The anime is one of two projects of "Project Luck & Logic", a multimedia franchise created by Bushiroad, who also created Cardfight!! Vanguard and Future Card Buddyfight, with the participation of five other companies (among them is Dogakobo, the studio behind the anime itself). The other project is Bushiroad's own card game, Luck & Logic. However, unlike typical anime based on a card game, the anime has little to do with the card game and is simply an introduction to the game's lore.

In addition to the main series, a spinoff title called "We Are Luck & Logic Club!" premiered as a series of shorts debuting on the Luck & Logic YouTube channel and also airing on TV prior to each episode of the main series. Set outside of the main continuity, the series focuses on a group of girls who play the card game version of "Luck & Logic" during their lunch club. "We Are Luck & Logic Club!" aired as two mini-seasons (comprising the actual show's full season) for 12 episodes each. The series is set to continue with the debut of "Hina Logi" in Summer 2017.

A yuri spinoff series aired in the Summer 2017 season. Titled "Hina Logi ~from Luck & Logic~", the new Lighter and Softer series follows a new protagonist, Liones Yelistratova, a small-time princess who travels to Hokkaido to join ALCA. There, she enrolls in Class S, and meets many unique classmates and Logicalists along the way, including Nina Alexandrovna who she falls in love with.