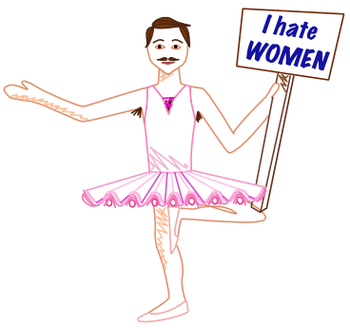 Conforming neither to tradition nor to modern taboos against overt misogyny, this guy's odd combination of feminine style and contempt for women puts him into an especially unusual position. Maybe some of his feminine traits might happen to have been a disadvantage to dating. Maybe he's just jealous that women wouldn't be considered as strange for similar mannerisms or lifestyles to his, perhaps wishing he were female instead as a result. Maybe he's insecure about his own lack of manliness, and seeing the traits he doesn't like in himself embodied in women brings out his inner resentment. Whatever the reason, he hates women while simultaneously acting in ways that are stereotypically associated with them.
Advertisement:

Such characters will generally be villains (or at least generally more often than tomboyish girls who happen to have contempt for males, perhaps partly because women diverging from gender norms is relatively more embraced), and represent an intersection of Politically Incorrect Villain and Sissy Villain. However, some portrayals may nevertheless be more sympathetic, and make him an intersection of Noble Bigot and Real Men Wear Pink.

Can also be a deconstruction of Gay Best Friend, especially if that's a role he never asked for — maybe all those "hilariously catty" putdowns he's slinging around are more pointed than you thought they were. And does he maybe seem a bit overenthusiastic to make use of his honorary B-Word Privileges, or to detail exactly what he finds unappealing about women?

A Sister Trope of He-Man Woman Hater. Compare/contrast with Female Misogynist (as a subset of Boomerang Bigot), who have a similar issue, but the contradiction is more immediately obvious in that case, as opposed to an effeminate misogynistic guy who could instead have stereotypes about women that aren't the same as the gender stereotypes of the setting in which he's presented.