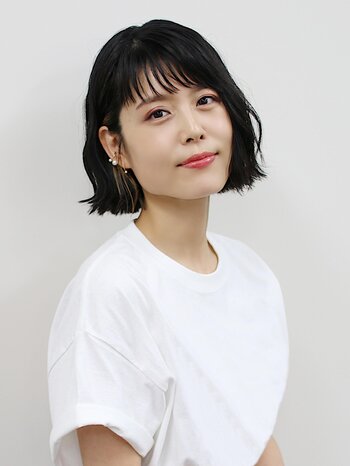 Miyuki Sawashiro (born June 2, 1985, in Nagano Prefecture, Japan) is a Japanese voice actress who was originally best known for voicing Puchiko in Di Gi Charat, but slowly broke out of her Token Mini-Moe Typecasting when people realized that she could do an amazing sexy Action Girl voice. Since then, she's had plenty of opportunities to demonstrate her considerable range and has been steadily gaining more and more prominent roles, from The Ojou to Troubled, but Cute, from Ax-Crazy to Plucky Comic Relief. She also has landed a number of roles as young boys and Tomboys. She's probably one of the hardest-working seiyuu - or even voice actresses, of any nationality - of the current age.

Chances are, if you have a popular anime or video game series, she'll be appearing in it. That's how many roles she's played, really. Some people can say that they've seen her name in any sort of cast list, just to possibly promote it as a bonus.

In other words, she's everywhere... EVERYWHERE.

Wondering if Takehito Koyasu would have his Distaff Counterpart about his whole "He's everything in this world"? Look no further than to this lady (though it takes the next generation for that).

She's one of the few voice actresses to have reprised her role in the English dub (for certain Di Gi Charat projects). By that proxy, her fluency in English is pretty good as well. She has mentioned in interviews that she learned English when she joined a homestay program in America, staying in Pennsylvania. One of her future goals is to do voiceover work in English.

Has a little brother named Chiharu, who entered the voice acting business in March 2014. She also got married that same year.

In 2018, her fellow voice actress Mayumi Tanaka announced that she had successfully given birth to her first child.

Here she is in GPS