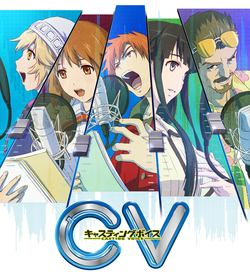 Left to right: Yukihiko Himeno, Saaya Uchiyama, Yuji Ban, Kumiko Jūjō, and Shū Michiba.
Released on June 16th, 2014, CV - Casting Voice is a game made by Bandai Namco, the premise being something of The Idolmaster with SEIYUUS!. Players take control of an unnamed producer as they manage a seiyuu agency, and they get to cast the seiyuus they hire in various Show Within a Show and get a good rating. There are also several DLC scenarios where you get to cast off some of Bandai Namco's existing properties, such as the Tales Series or The Idolmaster.
Advertisement:

Due to the nature of the game, it's probably safe to say that this won't be exported.

Tropes associated with this series