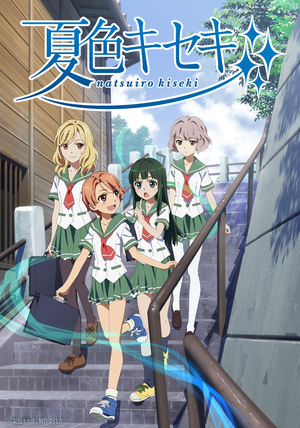 In Shimoda City, there is a Shinto shrine centered around a large rock. Legend has it that if four close friends make a single wish upon it, the wish will be immediately fulfilled.

A few days before summer vacation, Natsumi and Saki had a falling-out. To rub salt onto the wound, the next day Saki reveals that she plans on transferring schools. To help them make up, Yuka and Rinko invite them to the shrine. As they stare onto the skies, the rock emits a strange glow, and before they knew it, the four girls are flying.

Thus begins a summer vacation unlike any other.

Natsuiro Kiseki is a Slice of Life Schoolgirl Series anime produced by Sunrise for the Spring 2012 Anime season, with a manga illustrated by Tatsuhiko which came out during winter 2012. In reinforcing the theme of friendship, Natsumi, Saki, Yuka and Rinko are all voiced by the members of J-Pop group Sphere, themselves Names to Know in Anime: Minako Kotobuki, Ayahi Takagaki, Haruka Tomatsu and Aki Toyosaki, respectively.