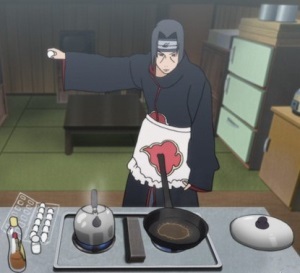 Itachi Uchiha heads downstairs into the kitchen of his former house at the Uchiha Compound in Konohagakure and proceeds to put on his Akatsuki outfit, along with an Akatsuki-themed apron. After putting a tea kettle to boil and setting bread in a toaster, he grabs a carton of eggs from the fridge and attempts to cook one sunny-side up. But the egg doesn't measure up to his standards, so he makes another... and another... and another...

Sometime later, Sasuke comes downstairs from a nap and Itachi asks him if he wants any eggs, the kitchen floor now being nearly completely covered with plates containing Itachi's failed eggs. Just as Sasuke proceeds to grab one of the many plates of ruined eggs strewn throughout the kitchen, Itachi yells at him to not eat any of the mistakes, and that he will only settle for making the best sunny-side up eggs for his brother. So, Sasuke sits on the table and waits for the egg...

Eventually, it's revealed that this is just one of Sasuke's dreams, through which Itachi was trying to tell him something. Sasuke figures it out at the end.