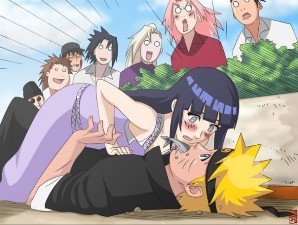 The shippers were willing to overlook the fish in Naruto's mouth.
Shippu! Konoha Gakuen Den is a Naruto OVA which was released in 2008 as part of the seventh Naruto Shippuden DVD, with its story based on and using the still-cells that were used in Shippuden's second ending credits animation.
Advertisement:

Set in an Alternate Universe from the main continuity, the OVA (narrated by Sakura, Ino, and Hinata) tells the story of Naruto and his misadventures at the high school he attends as a transfer student. From the first day, he swiftly establishes a fierce rivalry with Sasuke, picks fights with every person he can, and fends off gangsters who would seek to defeat him. The story also outlines the three girls' reactions to Naruto's antics, as well as teasing the famous NaruHina ship somewhat.

Although the OVA itself is roughly just over eight minutes long, the story shares many tropes with its parent universe, though no hints of ninja activity or tailed beasts are to be found here.