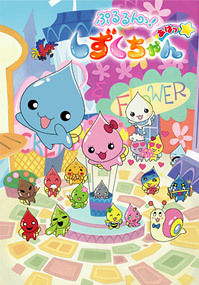 Some of the main characters in this series.
Advertisement:

Shizuku-chan is a kodomo media franchise created by Q-lia. Set in a world where fairies based on certain objects and elements exist, it stars the namesake young raindrop fairy.

It started off as a manga series in character and fashion magazines. The next year it became a children's manga series, as well as a series of picture and activity books. In 2006, TMS-e produced an anime series entitled Pururun! Shizuku Chan. It ran with 2 seasons for 2 years and a separate show titled Picchipichi Shizuku-chan aired on October 2012.