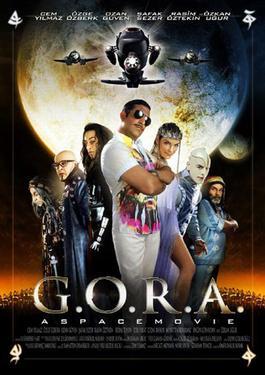 A used carpet salesman and con artist, Arif Işık (Cem Yılmaz) gets abducted by extraterrestrials from Planet G.O.R.A., whose military led by the mischievous Commander Logar (also Cem Yılmaz) regularly snatches humans for forced labor. Stuck light-years away where no Turk has gone before and determined to escape from captivity, Arif sets out on a formulaic journey involving eccentric characters, destroying a doomsday device, learning martial arts and rescuing a runaway princess from an arranged marriage, all while sticking to a Turkish diet of sucuk and raki.

Most likely the first Turkish science-fiction film with a budget, G.O.R.A. extensively uses computer-generated imagery, with production values meant to impress both at home and abroad. Inspired by Mel Brooks ' filmography and Yılmaz's own stand-up comedy routines, the script draws elements from numerous Western science-fiction works such as Star Trek, Star Wars as well as the more recent The Fifth Element and The Matrix, mashing them with Turkish mannerisms and tropes from recent and older works of Turkish cinema, without omitting numerous visual and running gags, considerable profanity and dubious humor.

A groundbreaking financial success on release following a troubled production phase, G.O.R.A. was followed by two sequels starring Yılmaz as Arif Işık, A.R.O.G. (2008) and Arif V. 216 (2018), both centered around accidental time travel to 1 Million B.C. and The '60s' Turkey respectively.