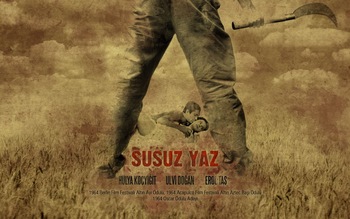 Dry Summer is a 1963 film from Turkey, directed by Metin Erksan.

Osman and his significantly younger brother Hasan are co-owners of a tobacco farm. They are the largest land-owners in the area. Their farm is also the site of a spring which is the main source of water for all the other small farms of the village; the water springs out of the ground on Osman and Hasan's property, then flows down a ravine into the flatlands around the village.

Osman, who is a thoroughly unpleasant person, decides one day to keep all the water from the spring to irrigate his own land. So, over the half-hearted objections of Hasan, Osman builds a dam and a drainage ditch that leaves all of his land irrigated but leaves all the other farmers dry. Tensions rise as Osman immediately becomes the most unpopular man in the village.

Meanwhile, Hasan is in love with Bahar, the prettiest girl in town. Her mother wants Bahar to wait to get married until after the harvest, but at Osman's urging, Hasan takes Bahar away from her home and they get married anyway. It soon becomes clear that Osman, who is a total creep, covets his brother's wife just as much as he covets all the water from the spring.