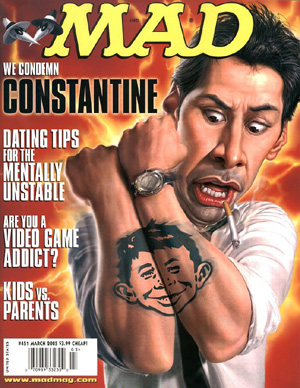 NOT SATIREnote Actually a caricature.
Laurie: Simon Flitoris, you saw that sketch, what did you think was going on there?
Fry: Well, you know, again, I thought it was very trite, rather predictable, I don't know what the word is you'd use to describe it, really...
Laurie: Squib?
Fry: Sort of, yes. Cod, spoof, guying, takeoff, pastiche, parody...
— A Bit of Fry and Laurie, "Critics

There seems to be confusion here, elsewhere on the internet and in the wider world about what satire actually is.

To help make things a little less complicated, here's a handy-dandy breakdown of three useful words for you to cut out and keep.

Satire
Satire is a genre of writing that criticizes and attacks vice, folly and abuse, particularly of ruling parties or those in power. It is marked by anger and a desire to change or destroy that which it attacks. It has a definite target and often uses humor to make a specific point. It does not simply "make fun" of a subject but seeks to inspire change. Ranges from the Horatian ("You need to laugh at yourself." OK, that one is humor-related.) to the Juvenalian ("You need to die").

Parody (also "Spoof")
Parody is the practice of copying the mannerisms, style or appearance of a work or its author's voice to make a point about that work (or sometimes unrelated other works). By adopting the guise of the attacked work, the artist reveals its inherent ridiculousness. Parody is generally gentler than satire and less venomous. Indeed, it is often good-natured or affectionate. It only attacks the style and content of a fictional work and not real-life events. It is possible to use a parody as the basis for a satire, however. See also Parody Tropes.

Pastiche
A pastiche (from Italian pasticcio, which is like a cross between meat pie and lasagna

) is something that copies or mimics elements of another work's style, possibly in a humorous way, but usually just as an affectionate nod to another artist's work. While the artist may have made the pastiche in homage, the work itself does not necessarily make any points, favorable or unfavorable, about the original. In a sense, it is a collection of references. See also Musical Pastiche.

Not to be confused with Parodied Trope.

If a parody, satire or pastiche is merely copying something line by line, scene by scene, image by image, then accusations of Plagiarism will quickly arise.

Meta-Example: The Futurama episode "A Big Piece of Garbage" is ...