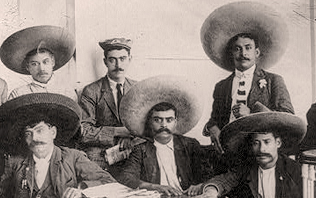 Some truly revolutionary 'staches.note Emiliano Zapata and his men sometime during The Mexican Revolution.
He wears a purple sash and a black mustache
In a honky-tonk down in Mexico
—The Coasters, "Down in Mexico

Latin American men outside the United States seem to have more 'staches than other ethnic groups (especially common between the 1920s and 1960s, when most American men were either clean-shaven or had very thin mustaches). Whether it's Good Hair, Evil Hair, Manly Facial Hair, or just plain funny depends on the character, mustache, and viewer.

This can be a Cyclic Trope, particularly when thick mustaches come back into fashion for men of all ethnic groups (notable, for example, in The '70s). If all the "Anglo" characters have thick facial hair, for instance, Mexican characters may go clean-shaven to emphasize their Aztec heritage.

Mexican actors Mario Moreno "Cantinflas" and Pedro Infante, as well as rebel warlord Emiliano Zapata (and, to a lesser extent, his contemporary Pancho Villa),note Villa is a bit more famous but his moustache, while magnificent, was distinctly less magnificent than Zapata's. are probably the ones who codified this trope.