Film / The Mask of Zorro 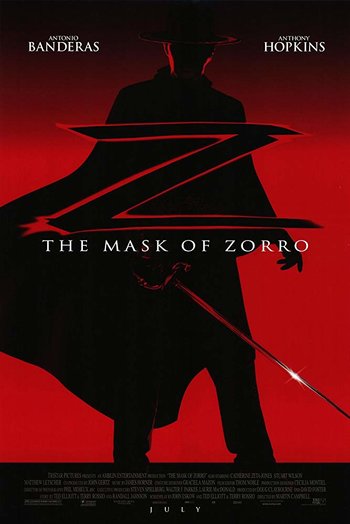 Justice leaves its mark.
Cpt. Love: After all, it's only one man...
Don Rafael: It's isn't just one man, damn it! It's Zorro!
Advertisement:

The Mask of Zorro is a 1998 swashbuckler film directed by Martin Campbell. It depicts the retirement of the aging Don Diego de la Vega as Zorro (Anthony Hopkins), and his training of a young punk (Antonio Banderas) as his replacement.

The story begins with the departure of the Spanish government from California, Northern Mexico. Don Rafael Montero (Stuart Wilson), the Spanish governor of California, makes one last attempt to defeat the legendary outlaw Zorro but fails. Zorro returns home to his wife Esperanza and baby daughter Elena, telling them that with the Spaniards out of Mexico, Zorro will retire. Not so fast: enter Don Rafael has deduced that Zorro is Don Diego. In the fight that follows, Diego's wife is killed, his house burned to the ground and Rafael absconds with the baby. Zorro is arrested and thrown into prison.

Twenty years later Diego escapes and, now a bitter, impoverished old man with nothing to live for, returns in secret to California. So has Don Rafael, who has been put back into power by the wealthy Mexican landowners who are still loyal to him; he also has brought Elena (Catherine Zeta-Jones), whom he has raised as his own daughter. Meanwhile, young outlaw Alejandro Murrieta (Antonio Banderas) has lost his older brother Joaquin to corrupt cavalry captain Harrison Love (Matt Letscher). Later, Diego meets up with Alejandro and offers to train him to become the new Zorro. Rafael and Love, in the meantime, hatch a scheme to purchase California from the President of Mexico, using gold secretly mined from California itself, and then destroy the mine and all the workers inside. Diego and Alejandro can't let this happen and will do everything they can to stop them, while getting both closer to Elena and putting her feelings to the test.

In 2005, the sequel The Legend of Zorro was released.