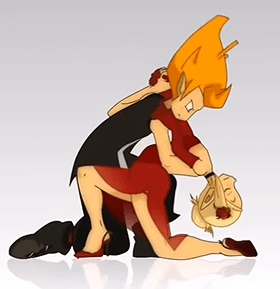 "Dance is a vertical expression of a horizontal desire."
— George Bernard Shaw
Advertisement:

Dancing, an age-old form of entertainment between one or more people. Dancing in some form can be found in almost any culture and is about as old as time. It could involve one person, two people, a few people, or a whole group of people. It could for fun, or for exercise, and is commonly shown to be romantic. Why just look at those two, so close to each other. They are really getting into it.

...Wow, they are really getting into it.

This trope is applied whenever a person in a work of fiction is dancing and it comes off as overtly sexual. This is not about two people dancing and it is all nice and romantic, this is a bit more… carnal. It could just be the nature of the dance style. But it could just as easily be a regular dance and the people in question are really into each other. After all, both activities involve two people, physical movement, and a fair amount of panting and sweating.

Unsurprisingly, at least a third of the examples on this page appear to be the quite physical and sexually-laden Tango.

This trope also applies to any song where dancing is used as a symbol, a metaphor, a euphemism, or a Double Entendre for sex. Not describing sex set to a beat, but they might as well have. It also applies to a performer who is thrusting, pumping or grinding his or her pelvis to simulate sexual intercourse while singing a sex song. Fusion Dance may sound like a literal version of this, but that type is actually quite different. Not quite the same as Dance of Romance, but couples who dance that might end up dancing this eventually.

Tenuously related to Intercourse with You. Contrast with Three Minutes of Writhing, which may invoke this trope.

To establish their lust for each other to the audience, the young couple dances very sensually, to the point of simulating multiple sex positions.

To establish their lust for each other to the audience, the young couple dances very sensually, to the point of simulating multiple sex positions.