A Scar to Remember 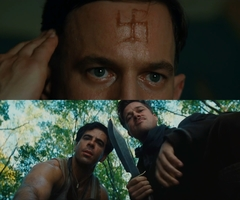 [slits cheek with clawed fingernails] I've left my mark on you. I won't forget it. Until I kill you, you're all I'll think about.
— Sniper Wolf to Solid Snake, Metal Gear Solid
Advertisement:

A Sadistic villain of some sort — usually a Psycho for Hire or The Dragon, but occasionally the Big Bad — decides not to kill The Hero or Love Interest when they have the chance. Perhaps the villain needs them stronger; wants to Break the Haughty and/or Make an Example of Them; needs to flee; or just likes to watch them squirm. However, the villain, being a villain, is not about to let their captive go scot-free, and decides to etch a token of the encounter into their flesh.

The villainously hammy rationale given will probably be that the bad guy wants the subjugated to forever remember the humiliation and corruption the latter endured at the former's hands. Or, perhaps, the villain has committed so many atrocities that they can't be bothered to remember each one, and they themselves need a visual mnemonic. If the victim is indeed the Hero, the villain may leave the wound as a mark, confidently assuming they have invoked Death by Disfigurement. If the victim is the Hero's love interest, particularly the Chick, expect this trope to be narrowly averted, because Beauty Is Never Tarnished — unless they and the Hero are an Official Couple, and it's time for an Official Couple Ordeal Syndrome. (More mature works may later feature a wordless Scar Survey among the couple undergoing or having undergone the syndrome, though at least expect the scar to heal well or still be relatively "beautiful.")

More rarely, an Anti-Hero will dole out the wound as a "self-consolation prize" to an enemy who is wanted or needed alive. When the scar-giver marks their own flesh with memorabilia, they become a Human Notepad.

Sub-Trope of Every Scar Has a Story, though the scar was created deliberately and with a motive: the story behind which we often see play out, whether in the present or in a Flashback. Often a Mark of Shame, but permanent and focused more on sadistic purpose than on the sociological consequences. Related to Battle Trophy, Creepy Souvenir. Usually leads to Scars are Forever. May overlap with Glasgow Grin; Good Scars, Evil Scars; Rugged Scar; or "X" Marks the Hero. Compare Zorro Mark, when a mark is left on walls or clothes rather than the skin as a Calling Card. If the work began lighthearted but has been growing Darker and Edgier, this trope is a symptom of Cerebus Syndrome.

Not to be confused with Dueling Scar, which is usually the result of a 1-on-1 encounter and is often coincidental rather than intentional.