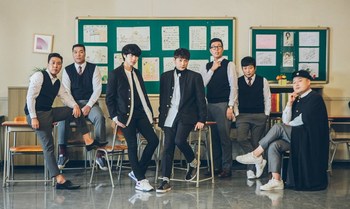 Knowing Brothers (Korean: 아는 형님; also known as Knowing Bros, Men on a Mission, and Ask Us Anything) is a South Korean television program distributed by JTBC. Originally having an audience-interactive concept wherein viewers were able to solve the questions posted on the bulletin board in a way that the cast members could use through the contest, three episodes were dedicated to a game show format before it became the classroom variety show it is known for.

The current format Brothers School (Korean: 아형고) is situated in a classroom, with the cast members act as high school students of the same age. Guests would come as transfer students from different schools and submit their entrance application, which is usually followed by the show’s most popular segment “Guess About Me”, wherein the guest asks a question about himself/herself and the cast members try to guess the correct answer.

Three episodes of the show have been dedicated to the behind-the-scenes footage of the cast members’ musical releases, which played a part in increasing the songs’ ratings and popularity. A duo called “Universe Cowards” (Korean: 우주겁쟁이; also known as Cosmic Cowards), consisting of Heechul and Kyunghoon, has released two songs. Youngchul was able to promote his third single, while Hodong was able to release a song after Hong Jinyoung guested on the show.

The discography provides examples of:

Alternative Title(s): Men On A Mission, Knowing Bros, Ask Us Anything